There is no exact definition of the term often used to describe certain characteristics of long-distance hikers, so I cobbled my own:

Hiker Trash – a term of endearment used to describe the necessary mental shift caused by living in the woods on a thru-hike for long periods of time.

Symptoms include a modification of socially acceptable behavior, especially in regards to frequency of showering and laundering; what constitutes nutrition; where and how you sleep; and what is meant by the word comfort.

It does not refer to those who disrespect the trail, nature, or others. No, those people are just plain trash.

Jen and I recently had a chance to get a better idea of the concept. It all started with these words:

Jen spoke the words nonchalantly, but I knew something unpalatable was about to be suggested. Over the 22 years we have been married, Jen and I have learned to communicate quite well. We banter ideas openly through casual conversation and are able to discuss just about everything without having to tiptoe. It is only the most sensitive of subjects that are preambled with, “I have an idea.”

The feeling I get when such a sentence is muttered is akin to the feeling of fear mixed with anticipation one gets when something delectably awful is about to happen. Like when a group of men are gathered around a bonfire drinking beers and one says, “Hold my drink, I wanna try something.” Yeah, it’s like that.

“I have an idea,” she continued, “let’s do a border run to Florida.”

“We need to get out of the country and … well … it would be cheaper if we didn’t stay in a hotel.”

Jen and I had been living in Costa Rica for over three and a half years and this would be our first border run in over a year. Unless one becomes a resident or a citizen of the country, visitors to Costa Rica are governed by a 90-day tourist-visa.

Our reasons for having to leave the country are complicated. We had paperwork showing we had applied for residency, but because we were planning to leave the country for good, we wanted to have a valid stamp just in case we had to deal with Migración. If we had to visit an agent in person we wanted our passport stamp up to date—because even though we were legally in the country, government officials like their i’s dotted, t’s crossed, and by-god, their passports stamped.

The two easiest ways to get a tourist visa refreshed is to go to a bordering country; Panama or Nicaragua. Not only is this the easiest way, it is the cheapest and quickest. But, Jen was concerned. What if we were detained because our passports were out of date? What if we were kicked out of the country? While not the easiest, or cheapest, or fastest; the safest way to insure a new passport stamp was to fly to the States. It is well known that an out of date stamp is rarely a problem at the airport. We needed to fly out, and unnervingly Jen said she had an idea of how best (read: most frugal way) to do it.

“Did you know there is a whole subculture of super-frugal travelers who refuse to get a hotel room when they have a layover, instead they just sleep in the airport?”

She went on to explain there is even a website named Sleeping in Airports that ranks airports based on their livability. Fort Lauderdale, where we needed to go, ranked OK in sleepability.

We lived in Costa Rica on a very strict budget, because we had decided in our early 40’s to leave successful careers for a semi-retired life where we valued experiences and adventure over possessions. Adventure was one word for sleeping in an airport.

Jen continued selling her plan; “We can ease our way into being hiker trash. We’ll be travel trash. It will be an adventure.”

Tickets were bought on Spirit (with no upgrades, naturally) and we would carry our own snacks. We would arrive in Florida around 3 p.m. and leave out the next morning at 8 a.m. Only 17 hours in an airport, how hard could it be?

We arrived in Florida right on time. Having no luggage except our carry-ons there was nothing to do but let the waiting begin. We went to a pub and each got a drink and discussed our plan.

The Sleeping in Airports website listed multiple options for sleeping arrangements at Fort Lauderdale International. Highest on our list was the “… couch in a darkened corner of the car rental terminal. Normally quite, air-conditioned, with free wi-fi.”

After wasting a couple of hours with drinks and roaming the different shops in the terminal we arrived in, we set out to find our hotel … er, the car rental terminal. We took a free airport shuttle several miles away, exited the shuttle and entered a modern, large building. And yes, it was air-conditioned. And yes, there sat a faux leather couch near the Avis counter.

While the couch was present, there also were bright overhead lights spotlighting the sofa. No darkened corner here. We decided we would start our experiment on a row of black chairs tucked away against a back wall. We were apprehensive about sleeping at the airport. What would other travelers think? Would a security guard ask us to leave? Should I sleep with my arms clutching my backpack? But we were here for the duration and had to buckle up for whatever came our way.

We retrieved our laptops from our backpacks, plugged them in, and verified there was working wifi. It was eight o’clock, and we kept eyeing the couch covetously, as if someone would take our bed for the night. The terminal was still too busy for us to make our move.

This was not true of the person I shall call Sleeping Boss.

Sleeping Boss arrived just before 9 with what looked like a trunk on her back and dragging a huge duffle bag. Boss sat on our couch and began removing clothes and items from her various pieces of luggage. Finally, after about 30 minutes of fidgeting she packed up her things and left.

We wondered what the heck she was doing, then noticed the boots she had left just in front of the middle section of the couch.

“She’s saving that couch for herself!” I said. “That’s brilliant.”

Sure enough, Sleeping Boss came back looking fresh from a shower—where she took a shower is anyone’s guess—in a nightgown, still shouldering her box and dragging her duffle. Boss lined her luggage up, pulled out a fluffy blanket then laid on the couch, utilizing every square inch. She donned a black sleeping mask and put, what I assumed was, earplugs in her ears. We watched this pro for several more minutes and realized we had a lot to learn about sleeping in airports. 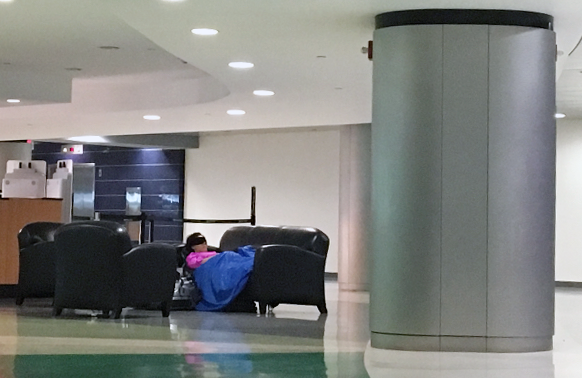 See, I am not exaggerating.

We came to terms that our lack of temerity had cost us a comfortable couch and relegated us to the wire-framed, stiff, uncomfortable chairs. The night crept by in fits of sleep. At midnight the car kiosks closed but it took until 1 a.m. to complete the wrap up of their day.

At 3 a low murmur startled me bolt upright. I immediately checked that Jen was OK, then looked to see that our backpacks were untouched. The sound was coming from near the sleeping couch and the murmur had turned to stifled giggles. A couple was looking at Sleeping Boss in awe … and taking creative selfies with the Boss in the background. 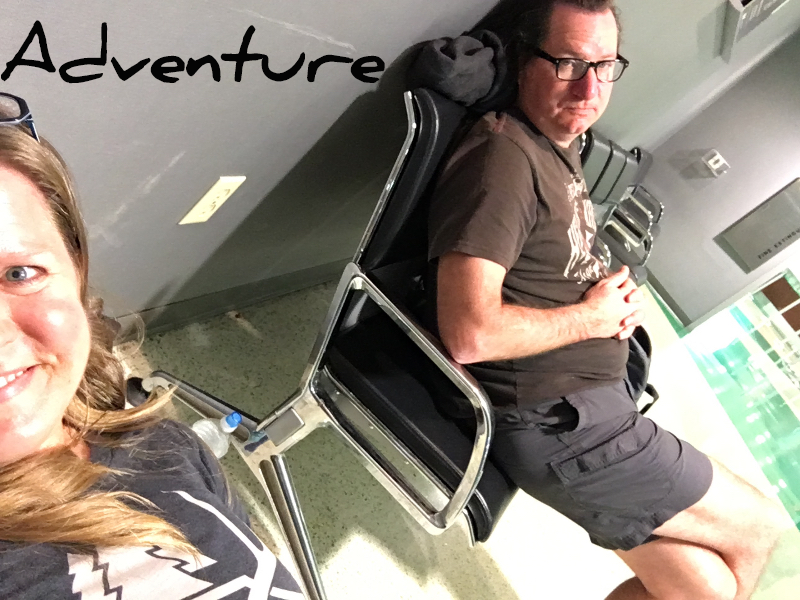 I was able to get back to sleep shortly after “pictures with a celebrity” had completed. Then at 4 the cleaning staff began waxing the floor, going back and forth like someone mowing a lawn. We were up with the sound and movement, so gathered our gear and shuttled back to our exit terminal.

The passport agent looked at our ticket and flight time and mentioned, “You guys sure are here early.” Yes. Yes we are. By 5 a.m. restaurants were open and we ate a slow breakfast and chatted about our experience and the naps we would take when we were back home.

When we took this trip many of our friends didn’t understand why we would choose to sleep in an airport overnight instead of getting a hotel room. Hell, I questioned it myself. Many don’t understand our desire to hike, sleep outside, and basically be homeless for six-months straight either (again, I question this myself). I will answer with the clichéd quote:

The mountains are calling, and I must go.
~ John Muir

Each adventure Jen and I undertake—whether it is quitting our jobs, moving to Costa Rica, sleeping in an airport, or now, preparing to hike the AT—changes and strengthens us, making us better individually and as a couple.