A Walk for Sunshine – excerpt

If you are like me consuming hiking books is like eating after you have been on the trail for a month … you read everything you can get your hands on. Today we provide you with an excerpt from A Walk for Sunshine, Jeff Alt’s memoir of thru-hiking the Appalachian Trail to honor his brother who has cerebral palsy. Buy it on Amazon. 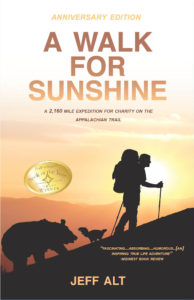 AT SUNRISE THE NEXT MORNING, everyone immediately started moving about, and I could finally see the faces of the folks I had intruded on the night before. No one looked like an ax murderer, but then, what does an ax murderer look like? The group consisted of a retired minister and his wife (the Spoons), a retired gentlemen (Bevo), a college student between career/academic paths (Magaroni), and a man of about 50 (Packrat). It turned out that he was attempting a thru-hike for the fourth time and was not retired and hadn’t taken a sabbatical from work. He had just plain quit his job in order to hike.

Everyone had assembled their gear into packs before I finished making coffee. I was moving slowly, and every step I took resulted in jolting pain from my blisters. Everyone said goodbye and good luck and was on the trail by 8 a.m.

My feet were pathetic. I sat there on my sleeping bag staring down at the most important asset for a hiker. My dogs were covered in square bits of flesh-colored moleskin and strips of duct tape. It looked like I had walked through a pile of confetti with glue on my feet. I squeezed painfully into my boots. My backpack was leaning against the side shelter wall, so I sat down on the shelter platform, leaned back, and slipped my arms through the pack straps. I stood up and immediately thought, It’s going to be a long day. I trudged on. The temperature remained low, never breaking 40 degrees. I moved along all day, winding through the Chattahoochee National Forest, going up and down Georgia’s finest mountains. By mid-afternoon, I arrived at a gap in the mountains called Miller Gap. Looking at the map unfolded on my lap, the profile showed a continuous five-mile climb straight up Blood Mountain, the highest peak of the AT in Georgia. This mountain was named after an Indian battle between the Cherokee and the Creek Indians. Supposedly, the battle was so fierce that blood dripped down the mountain.

I began my ascent after energizing myself with a candy bar. Every step challenged my balance. I felt like a roller-coaster car slowly approaching the top of the biggest hill, catching each chain link as I progressed closer to the top. As I approached the summit, it began to snow. The temperature had dropped significantly. Just the day before, it had been 60 degrees and sunny. The thermometer attached to my pack read 20 degrees, and when I stopped to take a drink, I noticed slush forming in my water. I was concerned. The profile map gave a poor indication of how much farther I had to go in order to reach the shelter. I could stop and pitch my tent if the weather became severe, but there would be no water supply.

Eventually, I summited Blood Mountain, which is a respectable 4,460 feet above sea level. The trail led smack into a four-walled gray stone shelter on the summit. Given the declining weather and a tough 12-mile day with raw feet, I decided to stop there for the night.

I stepped into the shelter and found one of the men that stayed with me the night before. His trail name was Bevo, and he was a Texan. Bevo is the name of the mascot of the University of Texas. The shelter had window cutouts but no panes of glass or shutters. The wind had picked up and was blowing snow into the shelter, which had begun to drift onto the sleeping platform. Bevo and I took the plastic ground cloths from our tents and some duct tape and secured it to the southern window, but the tape kept coming off. We collected some rocks from outside the shelter and used them as weights to hold the plastic.

We then cut some slits in the plastic so that it wouldn’t tear in the strong wind. I laid out my sleeping bag, put on all of my winter gear, and began cooking dinner. Since I was no longer walking and carrying a pack, my body got cold quickly. After dinner, I walked outside to answer nature’s call and noticed that I could see the lights of Atlanta. It was too cold to appreciate the view, so I ran back into the shelter. As soon as I could, I climbed into my sleeping bag, pulled out my headlamp and some paper, and began writing in my journal: March 2: 12 miles today, feet are hamburger. The temperature is around 20 degrees. The year of “El Nino” is not giving me the warm weather everyone predicted. Hopefully better weather tomorrow. Heading into Neels Gap for my first resupply.

I turned off my headlamp and burrowed deep into my sleeping bag to keep warm. In spite of the cold, I managed to doze off sometime later, only to be awakened by a heavy object moving across my feet and lower legs. I could hear my heart beating over the sound of an unknown creature moving around on top of my legs. Not knowing what to expect, I cautiously reached out, grabbed my flashlight, and turned it on. A skunk was lying on my sleeping bag! I cautiously nudged it with my foot, and it jumped off the platform, raising its tail. Great. The last thing I needed was a putrid scent on my gear and body, but the skunk didn’t spray me. Instead, it ducked out of sight under the bunk platform, which was about eight inches off the ground.

I took out my candle and lit it. I figured the little critter would leave me alone, being afraid of flames. I was wrong. Twenty minutes later, I felt the weight drop on my feet and legs again, I sat up, and there he was, sprawled out on my sleeping bag again. The candle had given him enough light to precisely place his body between my legs on my bag. I decided that he just wanted to keep warm and that he was going to stay there, so I lay back down. Believe it or not, I actually fell asleep with a skunk on my feet.

The next morning, the skunk was gone. He must have gotten up at first light and scurried back under the platform. I poured some water into my pan and fired up the stove. The temperature had remained below 20 degrees all night. I made some coffee with the hot water and ate a granola bar.

I only had a two-mile descent to Neels Gap, my first resupply point. I packed up my gear more quickly than I had done on the previous day. My feet still hurt, but the cold weather kept me moving fast in order to keep warm. I figured that the quicker that I moved down the trail, the quicker I would warm up. 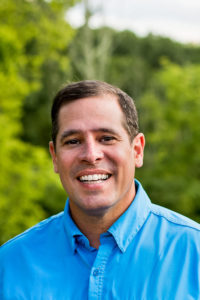 Biography (from Amazon)
Jeff Alt’s adventures, books, and advice have been featured on ESPN, Discovery Channel.com, Hallmark Channel, in Backpacker Magazine, the AP, Fitness RX for Men, LA Times, Women’s Health, Shape, Scholastic Parent & Child, and more. Alt is a celebrated author and a talented speaker. Alt’s book, A Walk for Sunshine, won the Gold in the 2009 “Book of the Year” awards sponsored by Fore Word Reviews, it took first place winner in the 2009 National Best Books Awards Sponsored by USA Book News and won a Bronze in the 2010 Living Now Book Awards. Alt’s book, Get Your Kids Hiking, won the bronze in both the 2014 Living Now Book Awards and the 2013 IndieFab Award in Family and Relationships. Alt has now created an award-winning children’s National Park series, The Adventures of Bubba Jones. The third book in the series will release in June, 2018. He is a member of the Outdoor Writers Association of America (OWAA). Alt has walked the Appalachian Trail, the John Muir Trail with his wife, and he carried his 21-month old daughter across a path of Ireland.